Pre heat the oven to about 400 degrees. Find a beautiful 15 to 16 ounce milk fed veal chop. Coat the bottom of a sauté pan with clarified butter. When the butter is hot, dust the chop lightly with all purpose flour and place in the pan. Generously brown the chop on one side and do the same to the other side. Remove the butter from the pan and deglaze with white wine. Add a little veal demi-glaze and chicken stock. Place the chunk of butter and two sprigs of rosemary on the chop. In the pre heated oven, place the pan with the chop 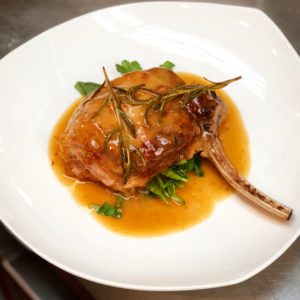 . Cook for about 15 to 20 minutes and serve. place the chop on a clean plate and cover with the sauce. Buon Appetito! Marcello