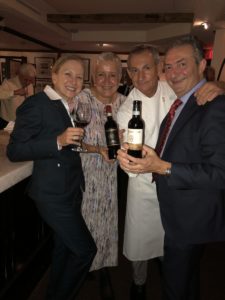 A night in Toscana! Virginie and Max from Avignonesi were our special guests on Thursday, November 1st and spoke very passionately about their love of Tuscany and Italian wine. Bar snacks opened the evening, next was Arancini Tartufo, Orata alla Livornese, Wild Boar Ragu, Bistecca and Biscotti. Our special house Biscotti were a perfect compliment to the Avignonesi Vin Santo 2001. Always heralded as on of the worlds most special dessert wines, it did not disappoint. From the Vino Nobile to the Desiderio to the Vin Santo all the wines were fantastic. We can’t wait until next year! Salute! Marcello