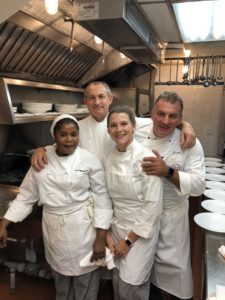 Well, our first wine dinner of the season was a tremendous success. We had Johnny here from Bread by Johnny. His artisinal bread was absolutely delicious. Chef Francesco Ingegnoli, from Ristorante CLaretta in Palm City, brought his Ravioli di Zucca with him and served them with brown butter and sage. Fantastico! Chef Sabrina Fiorentino made a delicious Limoncello Pie. What a night! And all that deicious food was paired by Marco Uperi from Artevino. He presented all his new and exciting wines from his portfolio. Next wine dinner…September 25th..Stay tuned! Marcello