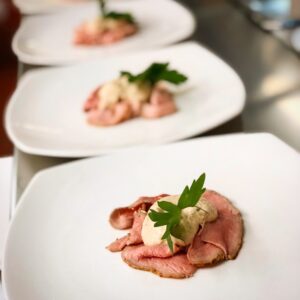 Our Latest Wine Dinner was on Tuesday September 25th and it was another big hit! Florent from XXI was here to present some of his stunning Italian selections, highlighted with two wines from Scarbolo in Venezie Giulia. We started with a beautiful Rose sparkling wine and ended with a Moscato d’ Asti from Piemonte. Dinner selections included Vitello Tonnato, Seared Scallops with Rapini puree, Watercress Risotto, Tagliata di Manzo and a perfectly Poached Pear in White Wine with Whipped Cream. All in all it was a beautifully balanced dinner. Thanks to Florent and his team in bringing us these special wine. Salute! Marcello