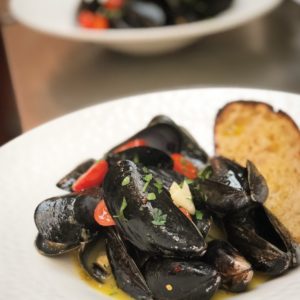 Coat the bottom of a large sauté pan with a very good quality olive. Extra virgin, if you must. Add 2 garlic cloves that have been smashed with the flat edge of a chefs knife. Just before the garlic is to brown add the mussels. 15 to 20 perfect cold water mussels are imperative. Best from north of New England or Washington state unless you can find some from the bay of Napoli. Add one 1/2 cup of white wine, a handful of sliced in half grape tomatoes and cover for 5 minutes on medium to high heat. Add some peperoncini and serve. A very crusty slice of toasted bread would also help in soaking up the juice when you a done devouring the mussels. Bon appetito! Marcello